Apologies for this post covering so many days, but the wifi at our hostel in Florence was barely passable. We were also pretty busy throughout, so I had little time to write.

Our first day in Tuscany was a busy one. We got into Firenze from Roma before noon and took the bus from the main train station to our hostel. The hostel is an enormous one, with many rooms, and many hostellers, and therefore, many devices sharing in the limited wifi. Overall, the place was clean, and reasonably priced, so we couldn’t complain too loudly. 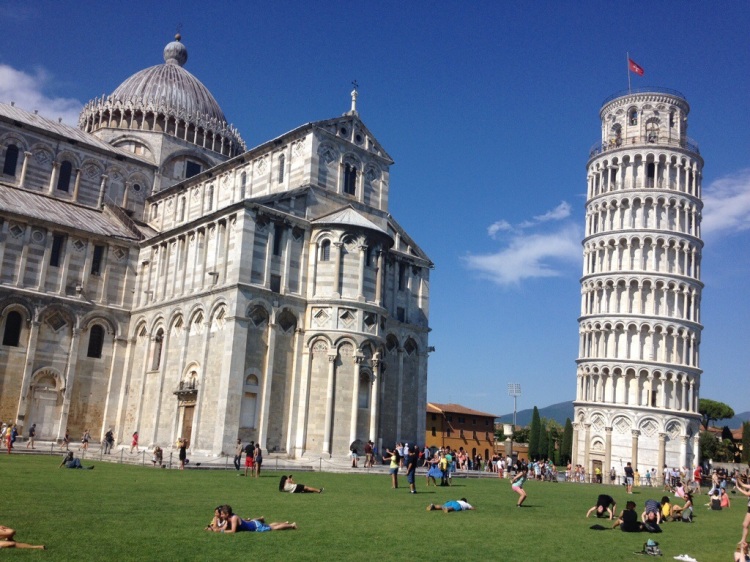 We dropped off our bags and raced to the nearby train station and hopped on a train to the destination for all tourists in Tuscany: PISA! A short walk through town yielded a decent lunch with well priced pizza and expensive drinks ($5.25CAD for a can of coke! Usually it’s closer to $3, so we check the menu now before sitting down). A short walk from there brought us to the square where we were able to admire the beautiful sight of Pisa’s cathedral, baptistry, and of course, its campanile (or bell tower, the Leaning Tower of Pisa). We took our obligatory photos and explored the grounds. We decided the buildings were too expensive to go into (18 euro to climb the tower, and 10 euro each to go into the baptistry and the museum), and ultimately passed on each option. Instead, we laid down in the shade on the perfectly manicured grass and enjoyed a gentle breeze that cooled us on what was a particularly hot day.

There was very little else to do in Pisa, so we caught the train back and enjoyed a light dinner of fruit before calling it a night back at the hostel, after a long day of travel and sightseeing. 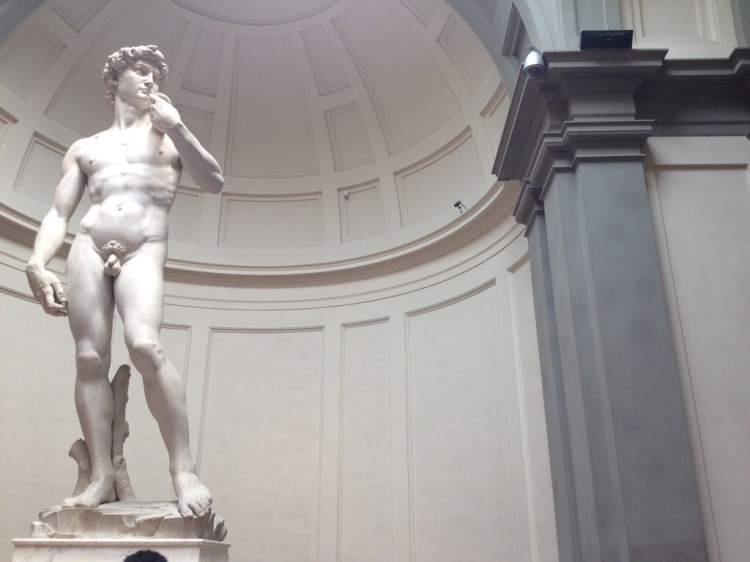 The next day, we made our first stop one of the most important sculptures of the Renaissance, Michaelangelo’s David. Housed in the Accademia dell’Galleria (built specifically for this statue), it is a popular attraction in Florence. Accordingly, we faced a 2 hour wait (half of which we spent under the hot Florentine sun), but our determination paid off. After exploring the gallery, which consisted mostly of paintings in different styles of either Christ Deposed from the Cross, Madonna and Child, and the Coronation of the Madonna, we turned the corner into the Gallery of David. Flanked on either side by huge marble slabs, works in progress by Michaelangelo himself the hallway leads to a great open space beneath a dome, where David stands in brilliant natural light. The contrast between Michaelangelo’s unfinished works (which appear as roughened men attempting to escape from their stone prisons), and perhaps his greatest sculpture, is striking. Breathtaking really. Impossible to describe in words. It is truly a moving experience, and a must see if ever in Florence. 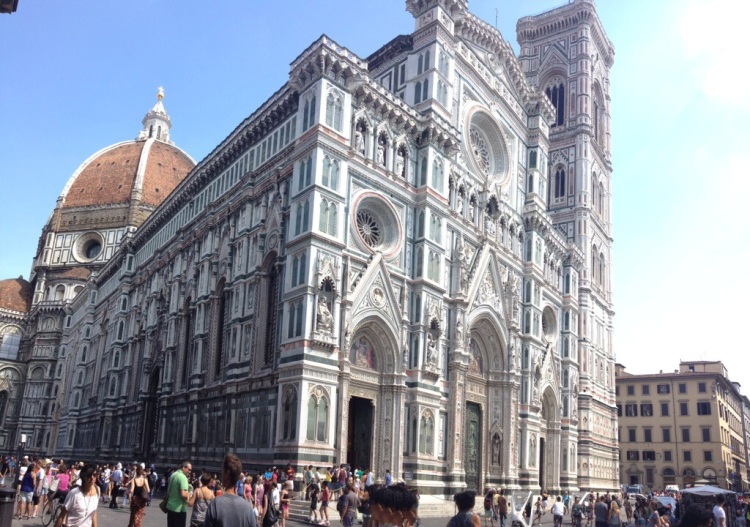 After the Galleria, we made our next stop the other symbol of Florence: Il Duomo, or, the Basilica di Santa Maria del Fiore. The basilica is grand in scale and appointment, and striking in its decoration. Where St. Peter’s Basilica was vast, and a picture of perfection from outside, Il Duomo is a work of art. Its roofs are orange tile, typical of Florence, and its walls are a stunning design involving white, pink, and green marble. I managed to take some photos of the interior, as entry was free, but the girls, unfortunately could not (as their clothes did not comply with the dress code; no shorts above the knee, and no sleeveless shirts).

Outside the basilica, we were able to appreciate its Campanile, which is nearly 300 feet tall and decorated in the same marble fashion), and directly across from the front entrance of the basilica, is the Baptistry of St. John, which was covered in scaffolding (continuing the tradition of Italy under Construction). Luckily, we were able to see its most famous feature: the golden front doors, known as the Gates of Paradise. 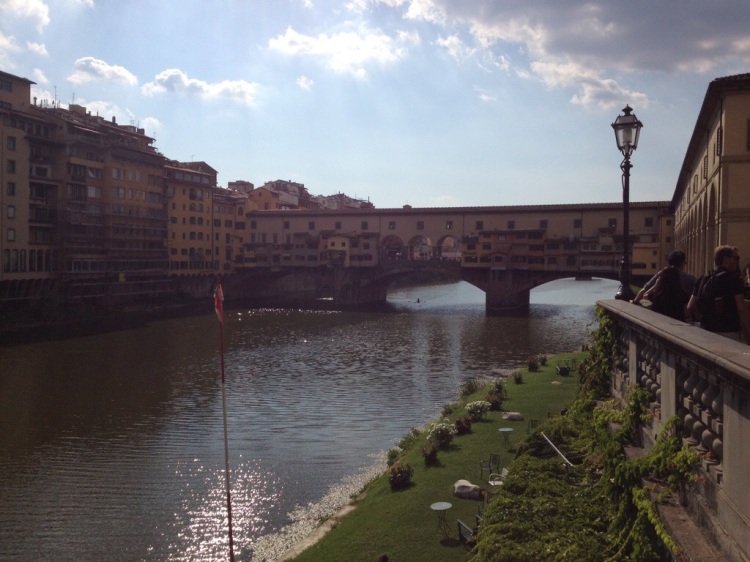 Next, we crossed the Arno River by way of the Ponte Vecchio (which is a bridge populated on either side by the extravagant displays of Florentine watch and jewellery makers; and is also home to another interesting feature I’ll mention shortly). On the south side of the river, we investigated the Palazzo di Pitti (our destination for the next day), and made reservations at a restaurant (to try Florentine steak the next day). We then walked back to the hostel for the night. 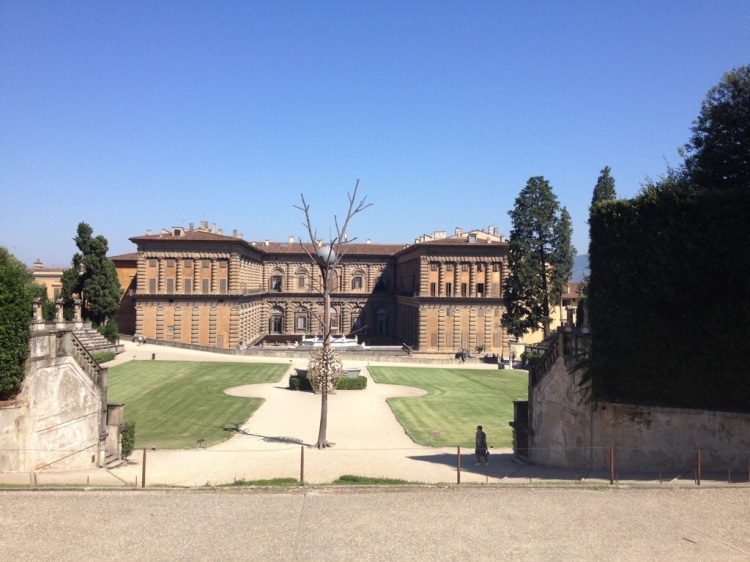 We got an early start the next day and arrived at the Boboli Gardens and Pitti Palace before 10:00AM. We started with a short walk through the smaller half of the gardens, which offered picturesque views of Florence, as well as a few fountains. We looped around the to the Medici grottoes, which are small alcoves built into the natural stone at the edges of the gardens. They are filled with frescoes and statues, but their appearance is accentuated by the natural stalactites that have grown down from the ceiling and begun to envelop some of the statues. The larger of the two grottoes also has another interesting feature: at its back, there is a pathway into the Vasari Corridor, which was built to allow for easy passage of the royal Medici family from the Pitti Palace, through a raised and covered passage over the Ponte Vecchio, and into the Palazzo Vecchio (which was more defensible than the Pitti Palace, and also was the site where royals could address their Florentine subjects in the city’s main square).

By then, the heat was starting to get to us, so we retreated into the Pitti Palace to explore the Museum of Treasures, which is a collection of religious Relics (mostly the bones of saints, decorated with ribbons and flowers, and stored in fancy gold containers). These were very creepy and cultish. We also visited the Costume Gallery, which was mostly about influential Italian women in the fashion industry, but also had the burial clothes of 3 of the Medici family members, which were over 400 years old. Very interesting!

Late afternoon rolled around and we ventured back into the gardens to explore the other side. We walked down Cypress Alley (a narrow road flanked on both sides and covered by rows of intertwining cypress trees), and visited the Island Fountain (which was turned off, but still looked nice). We then walked around to the Bardini Gardens, which were smaller, but far better kept (the fountains were on). This was a short walk down to the Arno River, and from there, we wandered along the waterfront until we found the hill leading to our next destination.

A visit to Florence isn’t complete without a trek up the southern hill to Piazza Michaelangelo. The piazza is named after the famous artist, and features a bronze copy of David, but the public space is not known for that, but rather, for its view. If you have ever seen a photo of Florence featuring il Duomo and the Arno, it was probably taken from Piazza Michaelangelo. It offers panoramic views of much of the city, and is well worth the hike up.

We shared a celebratory beer as the heat of the day was finally melting away, then meandered back down the hill and made our way slowly along the river to the restaurant where we’d made our reservation. 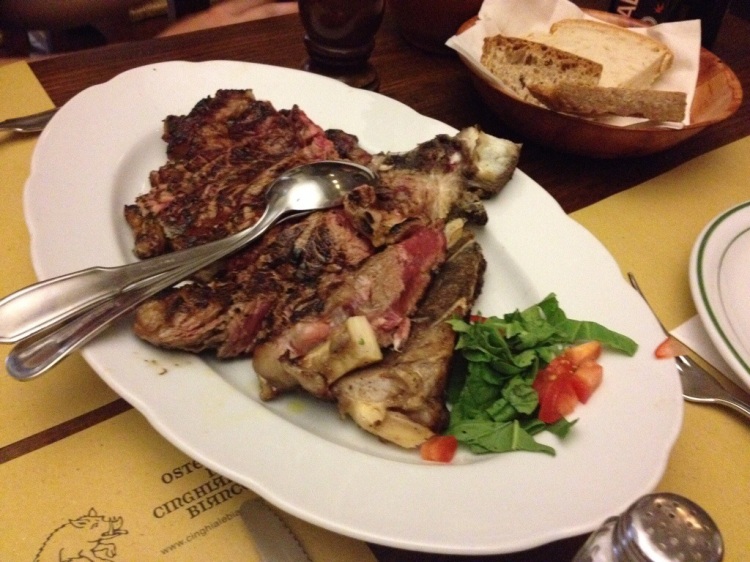 Cara, Erica, and I each had a mixed salad, and shared a few centilitres of wine over a kilo of Florentine steak. Definitely try it if you like your steak medium rare or juicier. That’s how we like it, and it was good.

We planned for a day trip out of the city next day, to start with an early day of trains, so we walked back to the hostel and called it an early night.