Okay, Florence wasn’t bad in any way, shape, or form, I just wanted to continue with the alliteration in a way that made sense. We made our last two days in the Tuscan region into day trips away from Florence, not because we were bored of Florence, but because these were great opportunities to see interesting Tuscan cities.

On day 14, Erica’s last day, we got up early and took the train to Lucca. Lucca is on the list of many who visit Florence because it is a beautiful, quaint little city, a short 2 hour train ride from Florence. It is perfect for families for a number of reasons.

The history of Lucca is a little foggy for me, but the key attraction of the small city, aside from its comfortable pace of lifestyle, is its city wall. The history of the Tuscan region involves countless wars between the various city states where one city would attack another, and another, and gain more and more influence (you’ll see this theme at our next visit). As a result, all the Tuscan towns have walls surrounding their old city centres. Two things make Lucca’s special:

Lucca’s town wall is complete. 100%. Unlike any other city wall in Tuscany, to my knowledge. This is largely because Lucca was rather unremarkable in the past and was attacked only on a few occasions (and due to their town wall, were successful in repelling those attacks each time).
Lucca’s town wall is a raised public park with a bike path (probably wide enough for two cars) flanked by benches and trees on either side. Each of the baluardos (or battlements) is a large outcropping of the wall which offers a larger green space for picnics, play, and the like.

We arrived in Lucca before lunch and walked from the train station, across the field surrounding the old town, and then up a ramp to the top of the city wall. It became immediately obvious how charming the city was, as well as how valued the city’s wall is. The place teems with bicyclers, runners, dog walkers, families—the young and the old alike. The three of us spent a good hour walking along the wall (with a break for lunch) before descending down from the wall into the city centre proper. We actually took a quick detour out of the city’s walls to find a place for a treat called La Bonta. A short 5 minute walk from the town’s wall, it makes the best gelato in the area, as well as a dizzying array of other delectable desserts and delicacies. I tried a mini blackberry pie, Cara tried a mini chocolate tart, and we shared a couple scoops of gelato. It was glorious.

After satisfying our sweet tooth, we went back through the city’s gate and began our exploration of the town in earnest. The city is difficult to describe as many of the streets are wider than typically found in the walled towns, while others are more narrow. The buildings on either side are newer in places, and ancient in others. One of the lanes has a river running down its centre, separating the roadway from the pedestrian area. Looking up, you get a true sense of the town’s medieval history, with its characteristic towers.

I won’t bore you with the details, but our stay mostly consisted of walking around slowly, enjoying the pace, looking at souvenirs (which we never ended up buying), and deciding on a place for dinner.

The one attraction we enjoyed was climbing Lucca’s signature tower, the Giungi Tower. This tower is one of two open to the public for climbing to the top, an activity which yields beautiful views of the city, as well as of the surrounding Tuscan mountains. What makes this tower unique is that it is topped by a stand of oak trees. Though they have been replanted over the years, oak trees have been known to grow at the top of that tower for hundreds of years (as evidenced by depictions of the town in frescoes and paintings).

After the tower, we whiled away the afternoon on the city wall, sitting for a time, enjoying the breeze, the sights, and a little bit of reading. I know. Relaxing, right? We then descended back into town to grab a quick bite to eat at a sandwich bistro that was recommended to us. Cara and I each shared a half of our sandwich. Cara had a traditional Tuscan salami panini with sheep’s milk cheese, and I had a fresh, raw sausage sandwich with smoked pecorino. Both were delicious, with the sausage sandwich being a little more adventurous. Erica also said her sandwich was excellent (and she’s not a big sandwich person!); her’s was sliced pancetta and pecorino cheese.

After dinner, we moseyed back to the train station and took the train back to Florence where we turned in early for the night, as Erica had to leave early. The next morning, we said our good byes, and Cara and I got up to get rid of our next day trip.

The mission for the day was to do a visit to historic Siena, as well as a stop in San Gimignano for a wine tasting. Right off the bat, we were worried because the forecast was calling for rain. Naturally, we were prepared and packed our rain jackets.

The rain started shortly before we got to the train station. We raced into the shelter and waited under cover for our train, which was to take us to our meeting place with the bus we’d booked. The rain was coming down reasonably hard as we checked in with the tour operator and got onto the bus, but we managed to avoid taking on too much water, and got comfortable on the bus.

That’s when the rain started in earnest. We laughed along the way as we got to know a couple from Saskatchewan who were on their honeymoon, and as we laughed, the rain died down and we outran the storm.

A short hour later, we arrived outside Siena’s walls and disembarked from the bus. Just as the rain caught up with us. We were dogged by the hardest rain I’ve ever experienced for ten minutes as our group navigated around the walls to our first stop, a Dominican church, to St. Catherine. A short tour through this church gave the rain enough time to die down, and then we were off to explore the rest of Siena with a local guide.

There are a few interesting things about Siena. First and foremost, Siena was a key trade route along the road from Rome to Paris. As a result, it saw the passage of many merchants and pilgrims. This gave the city a booming economy and made it one of the most powerful cities in the Tuscan region. Siena was also (according to our guide), the birthplace of the first public bank, and the bankers there are responsible for the invention of the traveler’s cheque. To this day, Siena is home to the headquarters of over 15 banks, including that of that first bank, which is still in operation as the second largest bank in Italy.

Siena also has a storied history of competition with Florence. Many of the structures within Siena are more grand, or slightly larger, than those found in Florence. Ultimately though, Siena was defeated by Florence, highways were rerouted, and Siena became a place of far less import. It was also devastated by plague.

The last thing to know about Siena is their system of neighbourhoods, called Contradas, and the Palio Horse Race. The old city is organized into 17 contradas, each with their own flag, colours, mascot, and seat. There are friendships between certain contradas and bitter rivalries between others. This even impacts romantic pairings and friendships. The culmination of this system is the Palio Horse Race, which occurs twice every summer. In these races, 10 contradas are selected to compete, in a horse race around the main square. The horses are assigned randomly 3 days before the race, but the contrada selects their jockey. The contrada then sees to a few trial runs of the course, and also has the horse blessed in their contrada’s chapel to make it a winner (the horse is considered most important, as the horse can win the race, even without the jockey). The day of the race, over 50,000 people gather in the main square to enjoy the race. First, there is a parade, and then the race starts. The race is short, with only 3 laps, and taking only a minute and a half, but the result is of great import. The two winners every year receive a hand-painted palio, a sort of banner to commemorate their win. They also earn bragging rights for the year, and get the honour of decorating Siena’s main streets with their flags, contrada colours, and special lanterns.

By the time our visit in Siena was done, we had learned a lot. We wandered around after our tour was done, browsed through too expensive shops (Siena is very rich as the majority of citizens are employed, or were employed by the banks), and had a traditional Tuscan lunch of pici (a very thick sort of spaghetti; mine in cheese sauce, and Cara’s in wild boar’s). We then returned to the bus as the sun came out, and turned in the direction of San Gimignano.

San Gimignano is a very small town, also with a largely preserved town wall, but best known for its many towers. At its peak, the city had over 70 towers (the guide explained that the towers were the rich man’s Lamborghini of the time; if you had money, you built one and showed it off). Many of these towers are still standing, though only one is open to the public to climb. This time, we opted to skip the climb as we did not have much free time in San Gimignano.

We started with a wine tasting of a red Chianti wine, which is typical of the Tuscan region, and then tried a white wine called Vernaccia of San Gimignano, which, if it isn’t entirely obvious, is a wine made solely in the region around San Gimignano. These wines were paired with typical Sienese sweets and treats. In particular, we tried paneforte, which is a special type of spiced fruit loaf that, believe it or not, is actually quite delicious and pairs well with the Vernaccia.

After the wine tasting, we had a short period of time to explore the city. Our first stop was to Gelateria Dondoli, the two time winner of Best Gelato in the World (2007/2008 and 2008/2009). The place was a nuthouse, and the gelato was excellent, so we were not disappointed. 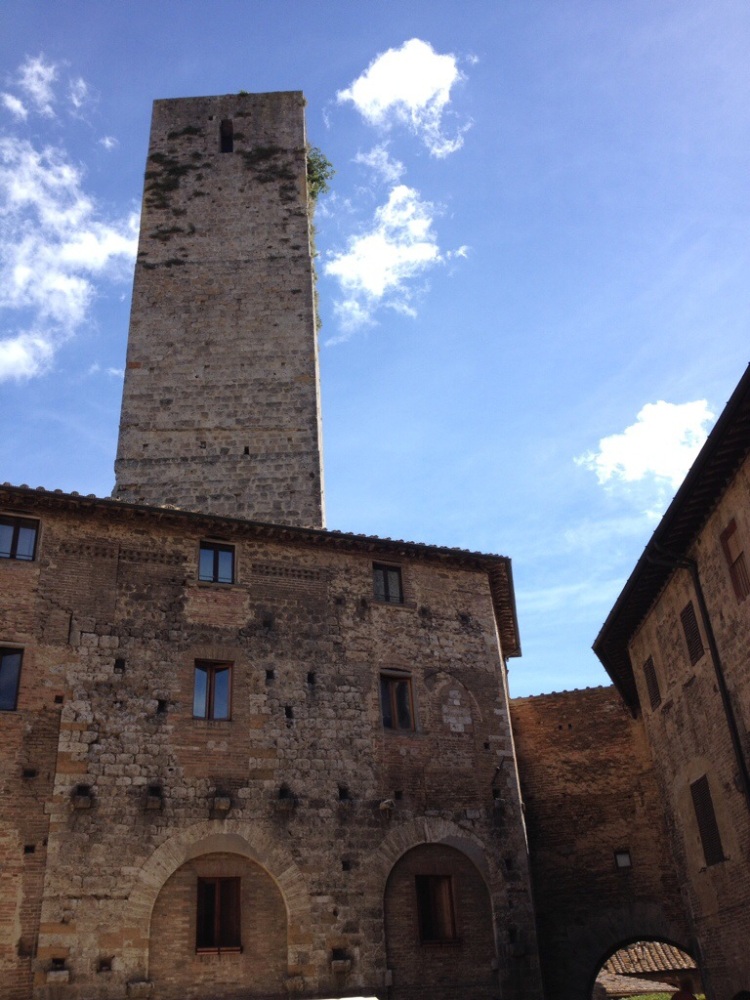 After satisfying our gelato craving, we explored the city and made our way up onto the city walls where we grabbed a few good photos with a breathtaking view of the Tuscan countryside, and then raced back to the bus.

We enjoyed the rest of our ride home chatting with our new friends from Saskatchewan, and then said good-bye in Florence. A slow walk back to the hostel was our farewell to the city. We sat down in the hostel garden with some fresh Tuscan salami, cherry tomatoes, and pecorino cheese and enjoyed a nice glass of red wine. A light dinner to finish off a busy day. We packed our stuff up and turned in for the night, ready for a day of travel the next day, and our introduction to Venezia, or Venice.

But our visit to Venice is for another update. Check in soon for that one!